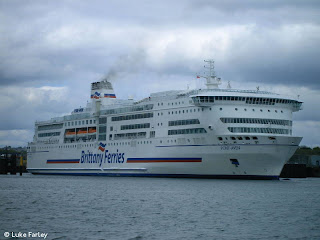 The Pont Aven is the Flagship ferry of Brittany Ferries. The Pont Aven as I have mentioned in a previous blog has just come back into service following its refurbishment. Newly announced is that the journey time on its route from Plymouth to Santander is to increase from 18 hours to 24 hours to save money on fuel bills. It is estimated it will save around 8% of the average cost. This might mean that fares could come down. If the fair does decraese by 8% it will now cost £52 instead of £57.

Posted by Laurence Mayhew at 13:03