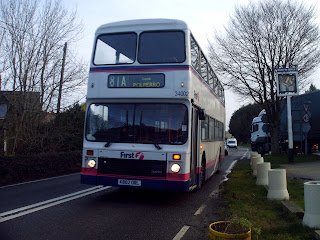 The only Torpoint Volvo Olympian 34002 proved a very unreliable bus since her introduction in March 2006. It has been said "She spends more time off the road than off the road". Her Volvo Penta engine has been the problem. There has been many mechanical and electrical falts with her. It has until now been fixed in the Depot at Torpoint but it is such a major problem it has now been sent to Laira Depot for what we think is a new engine or a major overhall. It has so far been away for about 3 weeks so it should return soon.

Posted by Laurence Mayhew at 17:59