Buses that followed me!

To celebrate the end of my AS Level exams, I treated myself to a trip out to Cardiff and Bristol. I'll move on to tell you about the fleets I found there at a later date, but for tonight I thought I'd show you the buses that followed me up there. 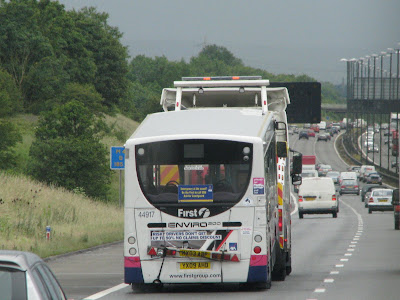 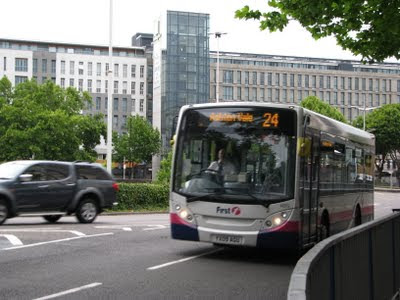 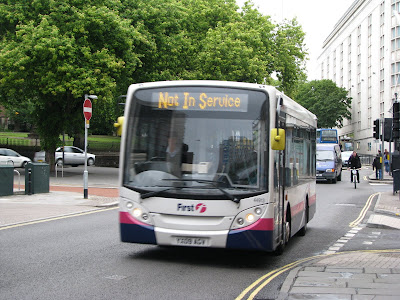 Firstly several of the mini Enviro 200s from the same batch that we had in Plymouth have been cascaded to Bristol. Several are seen here, along with 44917 which was on the motorway heading back from Wales, presumably from Swansea to Bristol. 44917 unlike the other two in the photos was based in Plymouth for a short time, and was one of the batch that had been sent to Swansea. Apologies for the quality of the photos. My camera really doesn't like to moving photos in fading light, even though this was on a very fast shutter mode. 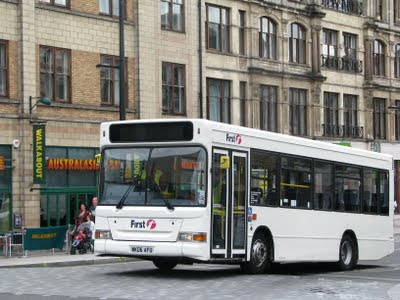 Much more surprisingly though, this little Dart appeared! Believe it or not this is Ex-FDC WK06 AFU. It was reported just a day week before that she was seen on the M5 along with sister WK06 AEE. It was presumed they were being returned off lease because these were new to Truronian. But well here one of them is again. Although not in Barbie 3, it has retained First fleetnames. Strange to see it in Cardiff of all places though, seeing as First only run 2 services into Cardiff, both pretty infrequent, so presume there isn't a depot for some miles away from Cardiff itself. What was even more strange, is that the bus wasn't even in service. Two what looked to be engineers were aboard, so I really don't know what was going on. So it shall be interesting to find out if we can complete the story as to whats going on with these Darts, presuming that the sister has also followed suit. What are the chances of that though, I go nearly 200 miles, and I still see the same buses!
Posted by Laurence Mayhew at 23:53

Don't get to excited, they aren't ex FDC Enviros in Bristol, they came down from Glasgow in exchange for 6 B7 when Plymouth got theirs. Re Cardiif, First have a depot on the outskirts of Cardiff, and at a guess it would have been on route training for the new 400 service.

Can you zoom into the picture of the mini Dart? I can see an address on the window, but can't read it...

Ah whoops quite right! We had 44914-20 in Plymouth, well spotted! So the one on tow certainly was from Plymouth though, but yes the Bristol ones didn't come this far down.

Well spotted Jared! Its the legals giving the address of the depot in Swansea as "First Cymru Buses Limited".

Where abouts on the M4 was it, I'm assuming between Newport & Bristol? I'll have to look out for it at Lawrence Hill!

I think it is quite common to see many of the same/similar fleets of buses across the whole South West region isn't it? When I've travelled to Bristol and Cardiff before, I've still regularly spotted the First services... Fascinating read though.

The short Enviro 200s are in Swansea for use on ex Veolia Cymru services - the other ex FDC Darts are at Cardiff for the new 400 service competing against Edwards Coaches.