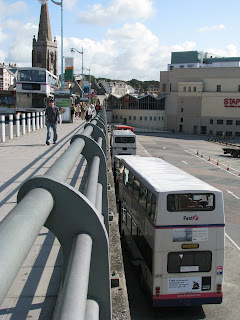 So we say goodbye to these from the streets of Plymouth. But who knows, the 2 may join the D-GHYs as open toppers in Penzance. Only time will tell.
Posted by Laurence Mayhew at 14:29

I believe there were more than 3 in the batch.

Indeed she did survive longer, whoops, its been modified now! I can't find any more than 3 though?