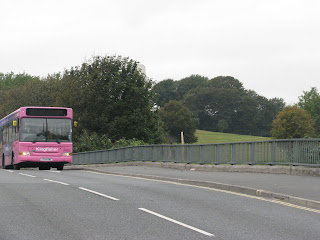 Now I do apolgise for such a terrible picture but don't worry I have my excuses lined up!

My battery charger has been playing up recently and the batterys are no where near fully charged. Infact this morning they wearn't charged at all, yet I forgot about this and proceeded with turning the camera on for this shock photo. In fear of not getting the blind showing 81A Plymouth via Devonport I put the camera onto continuous shoot mode. Sadly this continuous shooting only lasted for one picture before it died! It went off far too early, wasn't aimed correctly and even worse, the blind isn't showing!

But at least you can tell that this picture shows the new 81A with Dennis Dart 40002 going across Stonehouse Bridge! The bus was full to the brim with passengers, with not a seat spare. It seems that First have definitely not thought through bus workings!

Not only this for a very busy route but down the other end of the route in Cremyll there were also problems! 981 was not yet plugged into the Trident operating is this morning. Instead there was 81 Torpoint Depot, which also was driven via Witsand Bay, where it is advertised to not go via, but go via the Poron Factory! This didn't matter before when it was a school bus, but now its a stage carridge service I'm sure there will be people who will get annoied with this quite quickly!

Also was the new 81C that is advertised to go via Anderton. Some idiot has booked a Trident on this working! This means that the SERVICE cannot operate via Anderton and is diverted along the normal 81C via Maker! This left many school kids stranded round Anderton without a bus! There are some severe teething problems and hopefully these will be sorted, but it is not popular so far!

Another interesting thing to note is that there are no buses going to Millbrook from Cremyll between 12 and 3, all of these go straight to Cawsand! Again many people are angry about this. I've been trying to work out why this is, and I've come to the conclusion that it must be the ticket machines! They show who has got on at each destination and quite plainly no one needs or wants to get on to go on a bus to go to Plymouth from Millbrook. yet many will want to use the bus from Cremyll for Millbrook. But does this register on the ticket machines? All I know is this seems a very strange decision.

I'm sure there will be much more news on these changes in the weeks to come. Hopefully along with some better photos and some correct destinations!
Posted by Laurence Mayhew at 21:56